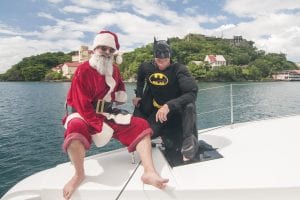 There’s no question that crewed and bareboat chartering has become one of the largest, most profitable segments of the entire recreational marine industry.

The annual US Sailboat Show in Annapolis, Maryland, now dedicates an entire portion of its exhibits to charter companies—the popular “Vacation Basin”—and of course, a vast number of the new boats on display, particularly along with the ever-growing catamaran ranks, are employed in the charter trade. To recognize that fact, in recent years, the judging panel has awarded a special prize to the top charter boat, a practice that has continued for 2020.

Perhaps not coincidentally, with Batman graphics throughout the boat, owners who wore Batman costumes to publicize their boat’s charter availability, and even a catchy name (Batamaran), the Fountaine Pajot Elba 45 available from Horizon Yacht Charters in Grenada, is ideally set up for chartering, and the won-over judging panel ultimately agreed that it made the Best Charter Boat for 2020.

It had all the major ­attributes required for a happy trip through the islands: It performed well; it had stellar accommodations, and it was well-laid-out for kicking back and enjoying the spritely sailing.

“I was very satisfied with this boat,” Cruising World judge Ed Sherman said. “It was well-built. I liked the way the deckhouse and interior were fashioned, and the way it was structurally engineered. It all indicated to me that this is going to be a strong boat that will last a while. Which is exactly what you want with a boat that’s going to be well-used with week after week of charter clients coming aboard.”

“It had that ‘four-by-four’ cabin layout—four staterooms and four heads—that’s ideal for chartering,” judge Ralph Naranjo said. “They’re squeezing a lot into the available volume down below, and I mean that in a good way. I’m happy with the way the steering station is laid out, with a single helm and a separated area for trimming sails. It’s going to maximize the fun for the sailors who charter her.”

Maximising the fun, of course, is the exact point of the exercise.

This blog piece is adapted from an article in Cruising World magazine.