Confessions of a Charter Base Owner – Part 3 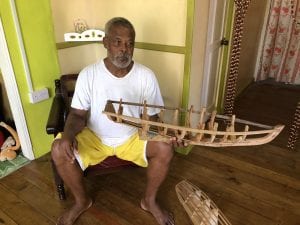 Welcome back fellow viewers!  I’ve had some great comments about my new blog series. Well, I say “great” and “comments” plural; does it count if it’s your favourite Auntie in Australia rekindling her love of the Caribbean Sea as it’s been 60+ years since she cruised here on her own boat?  Do feel free to comment back to me on email; always happy to hear your experiences.

Now, where was I?  Oh yes, enjoying all the amenities (yes, the bars, don’t judge me!) at True Blue Bay before our major voyage into the unknown.  After my first night sleeping onboard Horizon’s Lagoon 42 “Island Life” and meeting our amazing two crew, we were ready to say “anchor’s aweigh” and sail towards the Horizon but dramatic pause: there’s a Plan B.

Now, I love a Plan B as much as the next sailor (yes, I’ve decided I am now a sailor as I have slept on a boat) but this Plan B was different.  Due to the fact that I had volunteered to take a few inland photographs on Carriacou, the hubster and I were despached to St George’s which is the capital of Grenada to get the fast ferry whilst our crew and photography unit sailed the Armada throughout the day.  Clearly, they did not value my new-found sailing skills and frantic, knot-tying practice undertaken on the flight.

So off we went to the port clutching some EC$ – around EC$80 per person if I recall, just in case there are any other “sailors” out there who want to skip the sail to Carriacou.  But I do love a ferry ride, so I was very excited to see seats on the top deck where I could work on my tan and feel the sea breeze in my hair.  Being such an avid sailor, what I didn’t realise is that the sea is very calm and waves are very flat in the leigh of Grenada but we had around 25 knots of breeze according to my friend Windguru.

Picture the scene, gorgeous blue water, freckles coming along nicely and then WHAM!  A huge wave comes flying over the top deck of the ferry as we depart Grenada’s protected waters, soaking us completely.  I looked like an extra in the Titanic scene; the later scene as opposed to the sitting around drinking tea and having sandwiches scene with the Captain.  Trying not to look like I’d been for a swim, I managed to get myself down the stairs clutching the hand rails (yes, thank you, that’s a very handy tip to have in VERY LARGE LETTERS) and into the relative calm of the lower deck.  Well, who knew, eh?  Sailing and boating is all about learning and this was one of those “ah ha” moments; as Oprah likes to say.

Having dried out a little and starting to steam just a bit from the warm interior, we ventured out as we saw the island of Carriacou appearing through the window.  We arrived at pretty Tyrrel Bay which incidentally is a great anchorage for cruisers.  We stepped off the ferry and met a wonderful bus driver who was going our way so we hopped in.  Now, bear in mind that we are nowhere near Christmas or the Holidays but his bus was draped with more Christmas decorations than I’ve ever seen and we were definitely feeling the Christmas spirit in the back of the bus.  Nobody questioned this decorating phenomena, so we kept schtum and enjoyed the Jingle Bells music blasting out.

Our first stop was going to be the little town of Hillsborough just along from Tyrrel Bay on the west coast.  It’s a wonderful little town full of shops and bars and restaurants.  As you walk along “main street” you can see glimpses of the turquoise blue sea though the gaps.

Now, the people in the know told us to visit Patti’s Deli.  Now you would expect Patti’s Deli to be run by Patti but you’d be wrong.  Her name is actually Christine!  Go figure!  Christine gets asked 4,000 times per day (maybe an exaggeration) so she has created a really useful blackboard with information on the real Patti; her Granny.

We enjoyed a wonderful coffee sitting at the little inside bar and ogled the homemade cupcakes.  Christine sells some amazing things such as PG Tips from the UK and other British brands in her little deli.  We also saw some lovely ham on the bone so we bought a range of deli meats to have back on the boat with some fresh bread that she also sold.  A feast!  Why does sailing (OK, I realise I’ve only been on a ferry so far) make you so hungry?

Once we had fortified ourselves with coffee, we remembered that we were supposed to be taking photographs of cute places on the beach so found ourselves at Kayak Kafé asking if we could move the brightly coloured stools down onto the beach for an arty shot.  All well and good until the surf came up – oops!  That is how close the cafe is to the water’s edge.  Nobody bat an eyelid and we rearranged their furniture; the pace of life on this pretty island is certainly horizontal.  We ordered a homemade brownie but you can also have sandwiches, smoothies, beer etc.

Buzzing as we had now had coffee and chocolate, we decided to find a bus that would take us to the town of Windward where we were excited to see traditional boat building up close and personal.  We have an X One Design wooden classic boat which we race in the UK, so this was definitely on our bucket list to see.

We made our way to the local bus stop in town and waited patiently out of the morning sun.  There was lots of activity as street vendors were doing a great trade in tomatoes.  We managed to find a bus and hopped on.  Eventually we were the last two people on the bus and we told the driver that we were excited to see the boat building and especially any Carriacou sloops as we had seen those models racing during Classic Week in Antigua.  The driver was so hospitable that he said “I know where Alvin Eno, the boat builder lives; I’ll take you there”.  Now bear in mind that we had never met this legend and equally we had no appointment to turn up unannounced on his doorstep.  Apparently, that doesn’t matter in Carriacou.  We arrived at his house and the driver encouraged us to go in.  A very nice lady came out and we said “We’re here to see Alvin Eno” at which point she shouted his name in a voice as loud as a fog horn.  The poor guy was taking a mid-morning nap!  He came out to see who had turned up unannounced on his door step and then went back into to put his shirt on.  We were welcomed into his house with open arms and he was excited to share a little wooden model that he was working on for a special commission for a client abroad.  This is the power of the sea, of boating, of sailing; everyone’s a friend with a common passion.

Next time, we’ll be taking you further on our voyage as we sail to the small island of PSV (Petit St Vincent) and beyond to Union, Mayrea and the stunning Tobago Cays.

If this has whetted your appetite to explore the Grenadines from either our base in Grenada or St Vincent, click here.